The Huron Mountain Club, northwest of Big Bay in the Upper Peninsula's Marquette County, has been the subject of much local lore and speculation for the last century. It's a place that only a select amount of people get to see, let alone visit; the lucky few are either the long-time residents whose families have been club members for generations, or scientists who receive grants to study the local fauna. The area is rich in history and wildlife, and while the Club can be quite secretive, it always welcomes researchers. I've been lucky enough to have the opportunity to visit and stay at the club many times over the years, as my father, at the time, was studying the native insect species. Whenever we stayed, my family would be hosted at the Stone House on Ives Lake, perhaps the most beautiful area on the Huron Mountain Club's property. 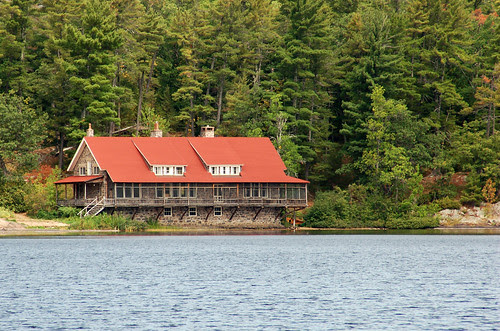 The Stone House sits right at the edge of Ives Lake, a glacial lake that is very deep and cold, carved out of the granite bedrock tens of thousands of years ago. The water laps at the stone walls of the cabin, and a porch encircles three of the structure's four sides. It is constructed from large logs hewn from the nearby hillsides, and granite taken from the area. The downstairs portion of the Stone House consists of a large kitchen and small dining area -- all quite rustic -- as well as a spacious area for researchers to work, a bathroom that once functioned as a darkroom, and a large living room. The fireplace in the living room, which is no longer used, has an inscription on the mantle that reads There is no defeat in truth, save from within; unless you're beaten there, you're bound to win. Bedrooms and bathrooms fill the second floor of the Stone House. Some rooms overlook Ives Lake; those are the very best to be in. I remember some mornings, where I'd wake up at dawn, and the gray of the sky matched the gray of the lake; the only sound would be the singing of the loons. The Stone House also has a basement and an attic. 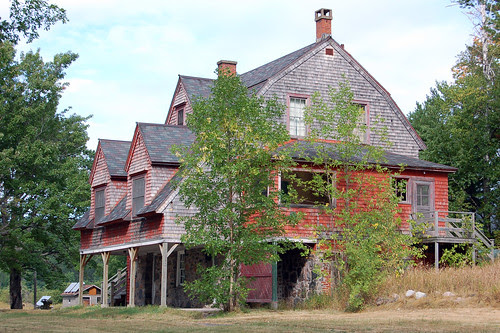 The Red House sits next to the Stone House. Both were built in the early 1900s (the exact date escapes me at this time), although at this time, the Red House is not being used. Club members are, however, working to get the Red House restored so that researchers can use it (the Stone House, believe it or not, does get very crowded in the summer months). The building is structurally sound and looks relatively untouched since its last use -- a time that I'd venture to be the 1970s. Unlike the Stone House, the Red House features a more Shingle Style -type of appearance. Next to the Red House is the caretaker's house, and beyond that is the Barn, which, after being threatened for some time, is very much safe and is in the very best interest of the Huron Mountain Club. 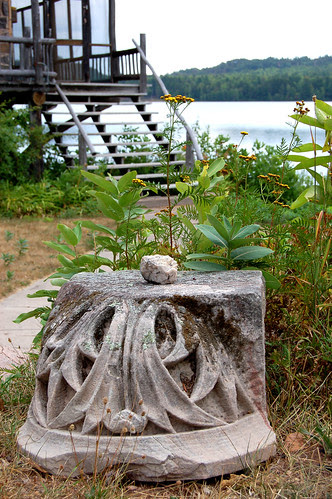 When we visited the Club in late August of this year, there were several changes to be seen. The structure adjoining the two silos had been demolished and the Oldsmobile inside was gone; the new caretaker had also cleaned up around the Stone House, improving the garden and moving two very curious architectural elements to decorate the pathway. He explained that he'd been in the field across from the barn when he'd found the two chunks of limestone (a stone not native to the area), decorated in the floral motifs of the Richardsonian Romanesque style. They had both most likely stood at the doorway of the barn that was once located where the field is today -- but where did they come from? Had Longyear purchased these elements in his travels and decided to bring them north? It's an interesting mystery.

One of these days, I would like to return to the Huron Mountain Club and continue a photographic survey of the area; the beautiful and rustic architecture is something that is very uncommon these days. The lack of paved roads and the banning of motor boats has kept the property peaceful and clean, and there seems to be a resurgence in interest among the younger generations of club members.
Posted by J. O'Brien at 2:08 PM 10 comments:

Last month, Preservation Wayne held their annual Detroit Theater Tour, which I attended for the first time. It was a very fun and informative day in downtown Detroit; our group, which was made up of about two dozen people, was led through the heart of the city, walking down Woodward Avenue to tour the Fox Theatre and State Theatre. We were taken inside the former Michigan Theatre, which now serves as a parking structure, as well as the Detroit Opera House (formerly the Capitol Theatre) and the Gem Theatre. An additional treat was getting the opportunity to see what was left of the Oriental Theatre which, until that afternoon, had not been visible to the general public.

I was so overloaded with information that when I got back home, I crashed and slept for a very, very long time!

Because this blog has generally always featured the exteriors of our state's architecture, I thought it might be good to break the mold and include some interior photographs from the tour. I took many pictures, some I was more happy with than others (next time, I am so bringing a tripod because, yes, there is time to use it during the tour). Most of my favorite photographs, however, were the lobbies of these various theaters. 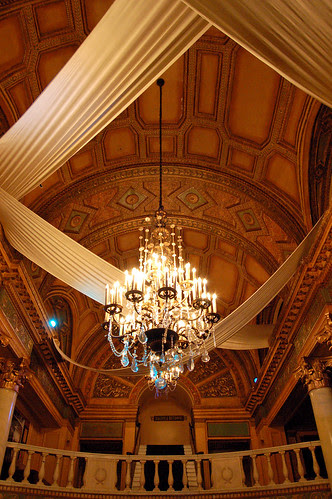 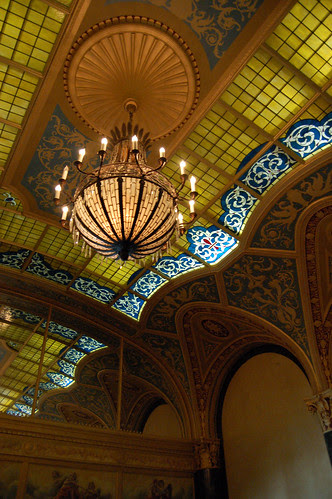 The Detroit Opera House, C. Howard Crane's first movie palace. The lobby was too small and it caused problems when the crowds were huge! 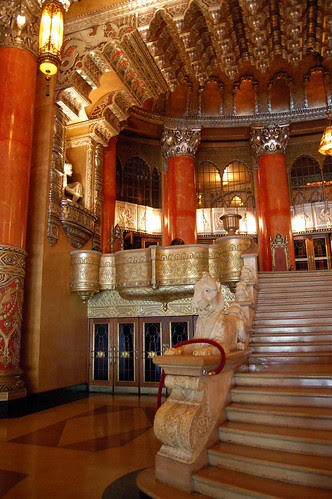 The lobby of the magnificent Fox Theatre.

It is amazing just how many theaters C. Howard Crane designed in the state of Michigan. What's even more impressive is the fact that each and every one is quite different from the next.

Watch for more frequent updates! I've started college at Northern Michigan University again, I've got more downtime, and I'm realizing that a lot of people read this blog.
Posted by J. O'Brien at 3:01 PM No comments: